Israeli security forces arrive at the scene of a shooting attack in Jerusalem’s Old City on April 20, 2018. (REUTERS/Ronen Zvulun) Police shot and killed a Palestinian gunman who opened fire on Israeli soldiers… 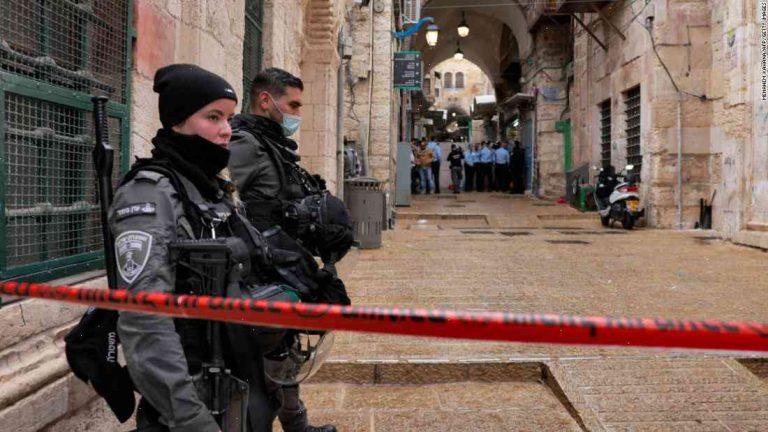 Israeli security forces arrive at the scene of a shooting attack in Jerusalem’s Old City on April 20, 2018. (REUTERS/Ronen Zvulun)

Police shot and killed a Palestinian gunman who opened fire on Israeli soldiers and police, killing one of them, on Friday in Jerusalem’s Old City. Police said they were responding to a firefight between Israeli forces and Palestinian gunmen who were active in the al-Aqsa Mosque, the third-holiest site in Islam. At least two of the gunmen were killed and the gunman who died was identified as a 21-year-old Palestinian from East Jerusalem.

The Palestinian incident followed a similar attack on Wednesday night in which Palestinians shot and killed a 21-year-old Israeli civilian who had come to the aid of another Israeli who had been hit by a bullet from the Israeli side of the border fence between Israel and Gaza. The violence in Jerusalem and its environs is just one of a number of incidents around the world that have wounded more than 30 Israelis and Palestinians, most of them Palestinians who work as cheap laborers for Israeli companies.

Palestinian health officials said at least four Palestinians were wounded in Israeli gunfire, including one who was shot and wounded in the chest. Another Israeli was seriously wounded by a bullet wound to the head. In the aftermath of Friday’s attack, a group of Palestinian demonstrators stormed the al-Aqsa Mosque compound and attempted to remove a 3-foot-high metal gate that had been installed to keep them out. Palestinians and Israeli security forces struggled over the key, which has not been opened since Saturday, when a similar attempt to remove it ended with both Israelis and Palestinians hurt.

Militants inside the compound opened fire on the crowd. A commander in the Israeli force told Reuters that Palestinians fired a “large number of bullets” at the Israeli forces inside the compound. Several Israeli security forces, including a commander who was part of a special force, were wounded in the shooting. The Palestinian news agency Wafa said that the gunman was not wearing a suicide vest but that the Israeli soldiers did not know where he was.

Read the full story at The New York Times.

14 killed, including two children, in attack on Israeli bus in Jerusalem